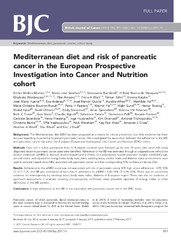 Background: The Mediterranean diet (MD) has been proposed as a means for cancer prevention, but little evidence has been accrued regarding its potential to prevent pancreatic cancer. We investigated the association between the adherence to the MD and pancreatic cancer risk within the European Prospective Investigation into Cancer and Nutrition (EPIC) cohort.
Methods: Over half a million participants from 10 European countries were followed up for over 11 years, after which 865 newly diagnosed exocrine pancreatic cancer cases were identified. Adherence to the MD was estimated through an adapted score without the alcohol component (arMED) to discount alcohol-related harmful effects. Cox proportional hazards regression models, stratified by age, sex and centre, and adjusted for energy intake, body mass index, smoking status, alcohol intake and diabetes status at recruitment, were used to estimate hazard ratios (HRs) associated with pancreatic cancer and their corresponding 95% confidence intervals (CIs).
Results: Adherence to the arMED score was not associated with risk of pancreatic cancer (HR high vs low adherence¼0.99; 95% CI: 0.77–1.26, and HR per increments of two units in adherence to arMED¼1.00; 95% CI: 0.94–1.06). There was no convincing evidence for heterogeneity by smoking status, body mass index, diabetes or European region. There was also no evidence of significant associations in analyses involving microscopically confirmed cases, plausible reporters of energy intake or other definitions of the MD pattern.
Conclusions: A high adherence to the MD is not associated with pancreatic cancer risk in the EPIC study.