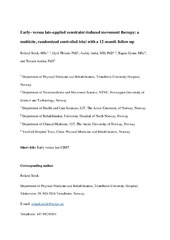 Compared with baseline data, both groups showed significant improvements in the primary and secondary outcome measures after 12 months. No significant differences between the 2 treatment groups were found before and after the delayed intervention group received CIMT at 6 months and during the 12‐month follow‐up. Both groups recovered considerably and showed only minor impairment (median FMA score of 64) after 6 months. The early intervention group showed an initially faster recovery curve of WMFT, NHPT, and MRS scores.
Discussion:

In contrast to most CIMT studies, our study could not find an effect of CIMT applied 6 months after stroke. Our results indicate that commencing CIMT early is as good as delayed intervention in the long term, specifically in this group of patients who might have reached a ceiling effect during the first 6 months after stroke. Nevertheless, the early CIMT intervention group showed a faster recovery curve than the delayed intervention group, which can be a clinically important finding for patients in the acute phase.

This is the peer reviewed version of the following article: Stock, R., Thrane, G., Anke, A., Gjone, R. I., Askim, T. (2017). "Early versus late-applied constraint-induced movement therapy: A multisite, randomized controlled trial with a 12-month follow-up". Physiotherapy Research International 23(1):e1689, which has been published in final form at https://doi.org/10.1002/pri.1689 . This article may be used for non-commercial purposes in accordance with Wiley Terms and Conditions for Self-Archiving.