The impact of changes in leisure time physical activity on changes in cardiovascular risk factors: results from The Finnmark 3 Study and SAMINOR 1, 1987–2003 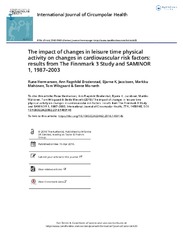