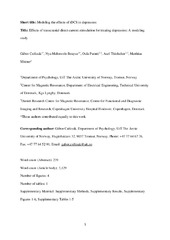 Background: Transcranial direct current stimulation (tDCS) above the left dorsolateral prefrontal cortex (lDLPFC) has been widely used to improve symptoms of major depressive disorder (MDD). However, the effects of different stimulation protocols in the entire frontal lobe have not been investigated in a large sample including patient data.

Results: For bipolar montages, EFs were of comparable strength in the lDLPFC and in the medial prefrontal cortex (MPFC). Depending on stimulation parameters, EF cortical maps varied to a considerable degree, but were found to be similar in controls and patients. 4 × 1 montages produced more localized, albeit weaker effects.

Limitations: White matter anisotropy was not modeled. The relationship between EF strength and clinical response to tDCS could not be evaluated.

Conclusions: In addition to lDLPFC stimulation, excitability changes in the MPFC should also be considered as a potential mechanism underlying clinical efficacy of bipolar montages. MDD-associated anatomical variations are not likely to substantially influence current flow. Individual modeling of tDCS protocols can substantially improve cortical targeting. We make recommendations for future research to explicitly test the contribution of lDLPFC vs. MPFC stimulation to therapeutic outcomes of tDCS in this disorder.