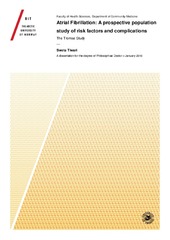 Background: Atrial Fibrillation (AF) is the most common arrhythmia associated with increased mortality and morbidity. It increases the lifetime risk of stroke and heart failure and affects one’s quality of life and cognition. Objective: To investigate diastolic dysfunction as risk factor for AF and AF as a risk factor for stroke and cognitive decline. Methods: Participants from the Tromsø Study were used as study sample. From the fourth survey (1994-95), 2406 participants who were free from AF, were followed until 2010 to examine the association between diastolic dysfunction, measured by echocardiography at baseline, and AF. From the same survey, 2844 participants free from stroke, were followed until 2012 to examine the association between AF and stroke, independently of other risk factors. From the fifth (2001) and sixth (2007-08) survey, 2491 participants with repeated cognitive screening were followed prospectively to examine AF as a risk factor for cognitive decline. Main results: Enlarged left atria (LA) as a measure of diastolic dysfunction gave a fourfold increased risk of AF in both sexes, and adding measures of abnormal diastolic flow increased the predictive ability significantly. When enlarged LA size was combined with CHA2DS2-VASc score ≥1, participants had nine times increased odds of stroke regardless of AF status. In stroke free participants, AF was significantly associated with 40% larger cognitive decline as measured with the tapping test. Conclusions: Diastolic dysfunction was found to be a risk factor for AF mainly through enlarged LA. Enlarged LA and CHA2DS2-VASc score >1was a strong predictor for stroke, regardless of AF status. Repeated cognitive screening measured with the tapping test found AF as a risk factor for cognitive decline. Our findings suggest closer clinical monitoring of patients with CHA2DS2-VASc score >1 and Holter monitoring in people with no known AF but with increased risk of stroke and cognitive decline.

Paper I is not available in Munin.