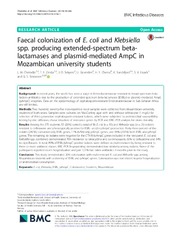 Background: In recent years, the world has seen a surge in Enterobacteriaceae resistant to broad-spectrum beta-lactam antibiotics due to the production of extended-spectrum beta-lactamases (ESBLs) or plasmid-mediated AmpC (pAmpC) enzymes. Data on the epidemiology of cephalosporin-resistant Enterobacteriaceae in Sub-Saharan Africa are still limited.

Methods: Two hundred seventy-five non-repetitive stool samples were collected from Mozambican university students of both sexes. Samples were cultured on MacConkey agar with and without ceftriaxone (1 mg/L) for selection of third-generation cephalosporin-resistant isolates, which were subjected to antimicrobial susceptibility testing by disc diffusion, characterization of resistance genes by PCR and ERIC-PCR analysis for strain clonality.

Results: Among the 275 students, 55 (20%) carried a total of 56 E. coli (n = 35) and Klebsiella spp. (n = 21) isolates resistant to ceftriaxone and phenotypically positive for ESBL- and/or pAmpC-production. Forty-three percent of the isolates (24/56) contained only ESBL genes, 11% (6/56) only pAmpC genes, and 36% (20/56) both ESBL and pAmpC genes. The remaining six isolates were negative for the CTX-M/pAmpC genes included in the test panel. E. coli and Klebsiella spp. combined demonstrated 70% resistance to tetracycline and co-trimoxazole, 63% to ceftazidime and 34% to ciprofloxacin. In total, 89% of ESBL/pAmpC-positive isolates were defined as multi-resistant by being resistant to three or more antibiotic classes. ERIC-PCR fingerprinting demonstrated low similarity among isolates. None of the participants reported recent hospitalization and just 12.5% had taken antibiotics 3 months prior to the study.

Conclusion: This study demonstrated 20% colonization with multi-resistant E. coli and Klebsiella spp. among Mozambican students with a diversity of ESBL and pAmpC genes. Colonization was not related to prior hospitalization or antimicrobial consumption.