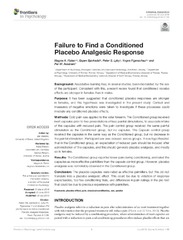 Background: Associative learning has, in several studies, been modulated by the sex of the participant. Consistent with this, a recent review found that conditioned nocebo effects are stronger in females than in males.

Conclusion: The placebo capsules were rated as effective painkillers, but this did not translate into a placebo analgesic effect. This could be due to violation of response expectancies, too few conditioning trials, and differences in pain ratings in the pre-test that could be due to previous experience with painkillers.