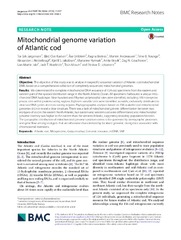 Objective:
The objective of this study was to analyse intraspecifc sequence variation of Atlantic cod mitochondrial DNA, based on a comprehensive collection of completely sequenced mitochondrial genomes.
Results:
We determined the complete mitochondrial DNA sequence of 124 cod specimens from the eastern and western part of the species’ distribution range in the North Atlantic Ocean. All specimens harboured a unique mitochondrial DNA haplotype. Nine hundred and ffty-two polymorphic sites were identifed, including 109 non-synonymous sites within protein coding regions. Eighteen variable sites were identifed as indels, exclusively distributed in structural RNA genes and non-coding regions. Phylogeographic analyses based on 156 available cod mitochondrial genomes did not reveal a clear structure. There was a lack of mitochondrial genetic diferentiation between two ecotypes of cod in the eastern North Atlantic, but eastern and western cod were diferentiated and mitochondrial genome diversity was higher in the eastern than the western Atlantic, suggesting deviating population histories. The geographic distribution of mitochondrial genome variation seems to be governed by demographic processes and gene fow among ecotypes that are otherwise characterized by localized genomic divergence associated with chromosomal inversions.