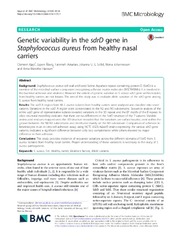 Background: Staphylococcus aureus cell wall anchored Serine Aspartate repeat containing protein D (sdrD) is a member of the microbial surface component recognising adhesive matrix molecules (MSCRAMMs). It is involved in the bacterial adhesion and virulence. However the extent of genetic variation in S. aureus sdrD gene within isolates from healthy carriers are not known. The aim of this study was to evaluate allelic variation of the sdrDgene among S. aureus from healthy nasal carriers.

Results: The sdrD A region from 48 S. aureus isolates from healthy carriers were analysed and classified into seven variants. Variations in the sdrD A region were concentrated in the N2 and N3 subdomains. Sequence analysis of the entire sdrD gene of representative isolates revealed variations in the SD repeat and the EF motifs of the B repeat. In silico structural modelling indicates that there are no differences in the sdrD structure of the 7 variants. Variable amino acid residues mapped onto the 3D structure revealed that the variations are surface located, exist within the groove between the N2-N3 subdomains and distributed mainly on the N3 subdomain. Comparison of adhesion to keratinocytes in an in vitro cell adhesion assay, using NCTC 8325–4∆sdrD strains expressing the various sdrD gene variants, indicated a significant difference between only two complements while others showed no major difference in their adhesion.

Conclusions: This study provides evidence of sequence variations across the different domains of sdrD from S. aureus isolated from healthy nasal carriers. Proper understanding of these variations is necessary in the study of S. aureus pathogenesis.