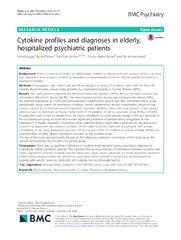 Background:
There is a paucity of studies on inflammatory markers in elderly psychiatric patients. Hence, our study was undertaken to investigate cytokines as biomarkers in diagnostically unselected elderly patients admitted to a psychiatric hospital.
Methods:
Demographic data, clinical data and blood samples, including 27 cytokines, were collected from 98 patients above 60 years, consecutively admitted to a psychiatric hospital in Tromsø, Norway (69°N).
Results:
The most common diagnosis was Recurrent depressive disorder (26.5%), the second most common was dementia in Alzheimer’s disease (20.4%). The most frequent somatic disease was cardiovascular disease (28%). No statistical association (p < 0.01) was found between cytokines and gender, age, BMI, anti-inflammatory drugs, psychotropic drugs, reason for admittance, smoking, vitamin supplements, alcohol consumption, length of stay, somatic disease (present/not-present) or psychiatric diagnoses. However, when allocating patients to two groups, depression and no depression, we found higher levels of 10 cytokines in the no depression group (FDR-p < 0.0044). Possibly, this could in part be explained by the higher prevalence of cardiovascular disease (CVD) and dementia in the no depression group, as these factors were significant predictors of patients being categorized as not depressed in a logistic regression. In addition, other unknown factors might have contributed to the association between no depression and elevated cytokines. On the other hand, the high level of psychiatric and somatic comorbidity in the study population may have led to increased levels of cytokines in general, possibly diluting the potential effect of other factors, depression included, on the cytokine levels. The size of the study, and particularly the size of the subgroups, represents a limitation of the study, as do the general heterogeneity and the lack of a control group.
Conclusions:
There was no significant difference in cytokine levels between various psychiatric diagnoses in hospitalized elderly psychiatric patients. This indicates that previous findings of correlations between cytokines and various psychiatric disorders in highly selected adult cases might not be applicable to elderly psychiatric inpatients. Further immunological studies are needed on gerontopsychiatric patients in general and gerontopsychiatric patients with specific disorders, preferably with patients that are physically healthy.