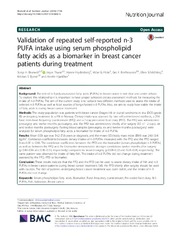 Background: The role of n-3 polyunsaturated fatty acids (PUFAs) in breast cancer is not clear and under debate. To explore this relationship it is important to have proper validated dietary assessment methods for measuring the intake of n-3 PUFAs. The aim of the current study is to validate two different methods used to assess the intake of selected n-3 PUFAs as well as food sources of long-chained n-3 PUFAs. Also, we aim to study how stable the intake of fatty acids is during breast cancer treatment.

Results: Mean (SD) age was 54.2 (7.8) years at diagnosis, and the mean (SD) body mass index (BMI) was 24.8 (3.4) kg/m2. Correlation coefficients between dietary intakes of n-3 PUFAs measured with the FFQ and the PFD ranged from 0.35 to 0.66. The correlation coefficients between the PFD and the biomarker (serum phospholipid n-3 PUFAs) as well as between the FFQ and the biomarker demonstrated stronger correlations twelve months after surgery (ρ 0.40–0.56 and 0.36–0.53, respectively) compared to around surgery (ρ 0.08–0.20 and 0.28–0.38, respectively). The same pattern was observed for intake of fatty fish. The intake of n-3 PUFAs did not change during treatment assessed by the FFQ, PFD or biomarker.