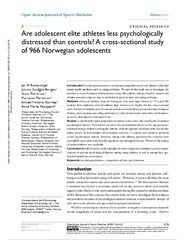 Methods: First-year athletes from all Norwegian elite sport high schools (n=711) and 500 students from randomly selected ordinary high schools were eligible for this cross-sectional study. In total, 611 athletes and 355 student controls provided self-report data about psychological distress, perfectionism, and eating problems (ie, body dissatisfaction and a drive for thinness), as well as their physical training/activity.

Conclusion: Results from this study highlight the need to target the maladaptive perfectionistic concerns to prevent psychological distress among young athletes as well as among their age-matched nonathlete counterparts.