Epidemiology of cervical cancer and high risk of HPV infection with a focus on Arkhangelsk City and County, Northwest Russia 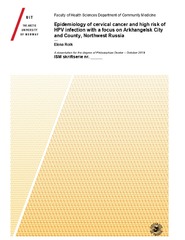 Human papillomavirus (HPV) is one of the most common sexually transmitted infections worldwide. It is also known as important risk factor for cervical cancer. Generally speaking, finding any cancer at an early stage is often believed to be the most important factor for longer survival. However, age at diagnosis, residence (i.e., accessibility to health care) and cell type of the tumor (less or more aggressive) are also important. In the research described, we wanted to find out whether there was a difference in the social and clinical characteristics of the patients with cervical cancer diagnosed with and without screening. We were curious if the risk factors associated with longer survival between these two groups were different. We were also interested whether knowledge about cervical cancer risk factors can motivate women to participate in screening or prevent them from being HPV positive. Arkhangelsk region is an important area of study because it has high annual cancer rates. It has implemented the Arkhangelsk Cancer Registry (ACR), which includes all cases of cancer in the region. Our findings indicate that women with cervical cancer diagnosed by screening were mostly older, had less aggressive tumour cell types, were in the earlier stages of the disease, and died less frequently from it. Moreover, diagnosis made within the screening program decreased the risk of death from cervical cancer. The importance of cervical cancer screening is affirmed by our research and wider use of it in the Arkhangelsk region is encouraged. Our study also demonstrates that majority of women in Arkhangelsk had sufficient level of knowledge about HPV and CC prevention. We have established that women with positive HPV status group differed from the HPV negative group by age, marital status, parity, age at sexual debut, number of sexual partners and cigarette smoking. Women with early age at sexual debut and those nulliparous have had a higher risk of having a positive HR-HPV status.