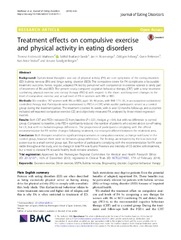 Background:
Dysfunctional thoughts- and use of physical activity (PA) are core symptoms of the eating disorders (ED) bulimia nervosa (BN) and binge eating disorder (BED). The compulsive desire for PA complicates a favourable treatment outcome; hence, regular, adapted PA led by personnel with competence in exercise science is rarely part of treatment of BN and BED. The present study compared cognitive behaviour therapy (CBT) with a new treatment combining physical exercise and dietary therapy (PED-t) with respect to the short- and long-term changes in the level of compulsive exercise and actual level of PA in women with BN or BED.
Methods:
We enrolled 187 women with BN or BED, aged 18–40 years, with BMI 17.5–35, in an outpatient randomised controlled therapy trial. Participants were randomised to PED-t or CBT, while waitlist participants served as a control group during the treatment period. The treatment covered 16 weeks, with 6- and 12 months follow-up, and outcomes included self-reported compulsive exercise (CE) and objectively measured PA, analysed by linear mixed regression models.
Results:
Both CBT and PED-t reduced CE from baseline (P < 0.01, Hedges g ~ 0.4), but with no difference to control group. Compared to baseline, only PED-t significantly reduced the number of patients who scored above cut-off rating for CE, but with no between-group differences. The proportion of participants complying with the official recommendation for PA neither changed following treatment, nor emerged different between the treatment arms.
Conclusion:
Both therapies resulted in significant improvements in compulsive exercise, a change not found in the control group, however there were no between-group differences. The findings are tempered by the low statistical power due to a small control group size. The number of participants complying with the recommendation for PA were stable throughout the study, and no change in total PA was found. Presence and intensity of CE decline with treatment, but a need to increase PA towards healthy levels remains unsolved.