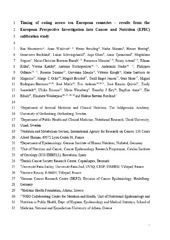 Objective: To examine timing of eating across ten European countries.

Design: Cross-sectional analysis of the European Prospective Investigation into Cancer and Nutrition (EPIC) calibration study using standardized 24 h diet recalls collected during 1995–2000. Eleven predefined food consumption occasions were assessed during the recall interview. We present time of consumption of meals and snacks as well as the later:earlier energy intake ratio, with earlier and later intakes defined as 06.00–14.00 and 15.00–24.00 hours, respectively. Type III tests were used to examine associations of sociodemographic, lifestyle and health variables with timing of energy intake.

Results: A south–north gradient was observed for timing of eating, with later consumption of meals and snacks in Mediterranean countries compared with Central and Northern European countries. However, the energy load was reversed, with the later:earlier energy intake ratio ranging from 0·68 (France) to 1·39 (Norway) among women, and from 0·71 (Greece) to 1·35 (the Netherlands) among men. Among women, country, age, education, marital status, smoking, day of recall and season were all independently associated with timing of energy intake (all P<0·05). Among men, the corresponding variables were country, age, education, smoking, physical activity, BMI and day of recall (all P<0·05).

Conclusions: We found pronounced differences in timing of eating across Europe, with later meal timetables but greater energy load earlier during the day in Mediterranean countries compared with Central and Northern European countries.