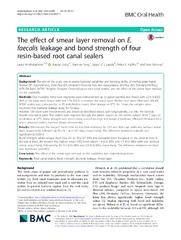 Methods: One hundred thirty root segments were instrumented up to apical size #60 and rinsed with 2.5% NaOCl. Half of the roots were rinsed with 5ml 17% EDTA to remove the smear layer. All the roots were filled with AH, ER, MTAF sealers and gutta-percha, or RS with Resilon cones. After storage at 37°C for 7 days the samples were mounted into bacterial leakage assay for 50 days.

Another 100 roots were instrumented and rinsed as described above, split longitudinally, cut into the cervical, middle and apical parts. The sealers were injected through the plastic mould on the dentin surface. After 7 days of incubation at 37°C, bond strength was tested using a notched-edge test fixture (Crosshead, Ultradent Products Inc.) and a universal testing machine (Lloyd Instruments).

Results: AH revealed the longest mean time for bacterial resistance by 29.4 and 36.8 days (with and without smear layer, respectively) followed by RS (15.1 and 24.7 days, respectively). The difference between materials was significant (p<0.001).

Conclusion: The effect of the smear layer removal on the sealability was material-dependent.