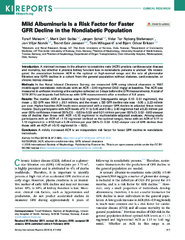 Introduction: A minimal increase in the albumin-to-creatinine ratio (ACR) predicts cardiovascular disease and mortality, but whether it predicts kidney function loss in nondiabetic persons is unclear. We investigated the association between ACR in the optimal or high-normal range and the rate of glomerular filtration rate (GFR) decline in a cohort from the general population without diabetes, cardiovascular, or chronic kidney disease.

Methods: In the Renal Iohexol Clearance Survey, we measured GFR using iohexol clearance in 1567 middle-aged nondiabetic individuals with an ACR <3.40 mg/mmol (30.0 mg/g) at baseline. The ACR was measured in unfrozen morning urine samples collected on 3 days before the GFR measurements. A total of 1278 (81%) participants had follow-up with GFR measurements after a median of 5.6 years.