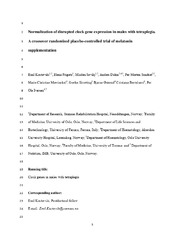 Objectives: Circadian oscillators are located both in the brain and in peripheral organs. Melatonin, the main brain-derived hormone governing circadian variations, is highly associated with daylight patterns. However, in subjects with tetraplegia the melatonin levels are blunted. Here we studied peripheral oscillators in peripheral blood mononuclear cells (PBMCs) in males with tetraplegia by examining how exogenous melatonin may influence the expression of clock gene mRNAs.

Methods: Six males with tetraplegia received 2 mg of melatonin or placebo 4 days before the study period. We also included six able-bodied men sleeping or kept awake during the night. Plasma samples were collected four times during a 24-h period. The mRNA expression levels of the clock genes PER1, PER2, BMAL1, and REV-ERBα were quantified in PBMCs using quantitative RT-PCR.

Results: The mRNA expression levels of PER-1 and –2 and REV-ERBα were increased at 04:00 h compared with the ablebodied controls (p < 0.05). Melatonin supplementation changed mRNA peak-time toward the time of supplementation.