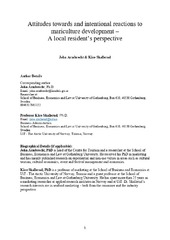 Aquaculture (i.e., farming of aquatic organisms, including fish, molluscs, crustaceans, and aquatic plants) is playing an increasingly important role in the global food supply. The contribution of aquaculture to total fish production has risen steadily, reaching 44% in 2014 (Moffitt and Cajas-Cano, 2014). The future growth of aquaculture is expected to help accomplish the Sustainable Development Goals (SDGs) by reducing environmental consequences associated with livestock while simultaneously increasing food security and promoting the nutritional benefits of marine food products (Thilsted et al., 2016). An increase in aquaculture is, however, dependent on its expansion to new sites outside the traditional aquaculture areas. Sweden, especially its southwest region, is one potential new area for mariculture development. The Swedish government has adopted a national strategy to develop the mariculture industry to become a profitable and sustainable industry with ethical production standards.1 While Swedish aquaculture produces moderate quantities today, its year-on-year growth target between the present and 2020 is an average increase of 8% annually (corresponding to a 71% increase from 2013 to 2020). This goal corresponds to an annual production in 2020 of fish for consumption and crayfish and mussels of approximately 23,000 tonnes as well as a total annual production of 25,000 tonnes of fish and crustaceans.