It’s Been a Hard Day’s Night and I’ve Been Working Like a Dog: Workaholism and Work Engagement in the JD-R Model 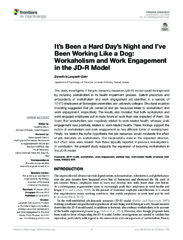 The study investigates if the job-demands resources (JD-R) model could be improved by including workaholism in its health impairment process. Salient predictors and antecedents of workaholism and work engagement are identified in a sample of 12170 employees at Norwegian universities and university colleges. Structural equation modeling suggested that job demands and job resources relate to workaholism and work engagement, respectively.
The results also revealed that both workaholics and work-engaged employees put in more hours at work than was expected of them. We found that workaholism was negatively related to work-related health, whereas work engagement was positively related to work-related health. These findings support the notion of workaholism and work engagement as two different forms of working hard. Finally, we tested the buffer hypothesis that job resources would moderate the effect of job demands on workaholism. The moderations were in the expected direction, but effect sizes were weaker than those typically reported in previous investigations.
In conclusion, the present study supports the expansion of including workaholism in the JD-R model.

The data analyzed in this article is provided by the ARK Research Platform, Department of Social Sciences, The Norwegian University of Science and Technology. Detailed results are available upon request.