Playing a video game is more than mere procrastination 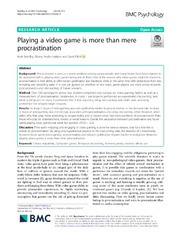 Background: Procrastination is seen as a severe problem among young people, and many factors have been claimed to be associated with it, playing video games being one of them. One of the reasons why video games might be related to procrastination is their ability to offer instant gratification and feedback, while at the same time offer distractions from less tempting and rewarding tasks. It is not yet agreed on whether or not video game players are more prone towards procrastination and discounting of future rewards.

Discussion: Time spent enjoying and engaging in video gaming is done for various reasons, only for a few this is related to procrastination. By using only hypothetical payouts in the discounting tasks, the absence of a relationship between hours spent video gaming, procrastination and delayed gratification requires further investigation. However, playing video games is more than mere procrastination.