Musculoskeletal symptoms among workers in the commercial fishing fleet of Norway 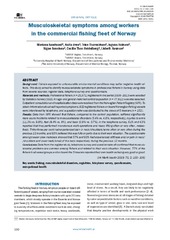 Materials and methods: Professional fishers (n = 25,971) registered in the period 2008-2013 were selected by Statistics Norway (SSB). An age- and gender-matched control population (n = 77,913) was also selected. Outpatient consultation and hospitalisation data were received from the Norwegian Patient Registry (NPR). To obtain information about self-reported symptoms, 832 registered fishers on board Norwegian fishing vessels were interviewed by telephone, and a questionnaire was distributed to the crews of 5 trawlers (n = 153).

Results: Data from NPR showed that fishers, compared to the control population, suffered significantly more acute incidents related to musculoskeletal disorders (5.4% vs. 4.8%, respectively), injuries to arms (11.3% vs. 9.8%), feet (8.4% vs. 8%), and back (0.9% vs. 0.7%). In the telephone survey, 61% and 43% reported that they performed monotonous work operations and heavy lifting often or very often, respec- tively. Thirty-three per cent had experienced pain in neck/shoulders/arms often or very often during the previous 12 months, and 93% believed this was fully or partly due to their work situation. The questionnaire among trawler crew members showed that 57% and 60% had experienced stiffness and/or pain in neck/ /shoulders and lower back/small of the back respectively during the previous 12 months.

Conclusions: Data from the register study, telephone survey and questionnaire all confirmed that musculo- skeletal problems are common among fishers and related to their work situation. However, 77% of the fishers in all vessel groups and on board the 5 trawlers reported their own health as being very good or good.