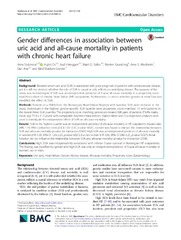 Background - Elevated serum uric acid (SUA) is associated with poor prognosis in patients with cardiovascular disease, yet it is still not decided whether the role of SUA is causal or only reflects an underlying disease. The purpose of the study was to investigate if SUA was an independent predictor of 5-year all-cause mortality in a propensity score matched cohort of chronic heart failure (HF) outpatients. Furthermore, to assess whether gender or renal function modified the effect of SUA.

Conclusions - High SUA was independently associated with inferior 5-year survival in Norwegian HF outpatients. The finding was modified by gender and high SUA was only an independent predictor of 5-year all-cause mortality in women, not in men.