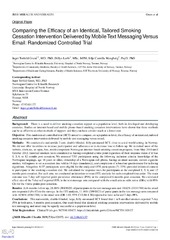 Background - There is a need to deliver smoking cessation support at a population level, both in developed and developing countries. Studies on internet-based and mobile phone–based smoking cessation interventions have shown that these methods can be as effective as other methods of support, and they can have a wider reach at a lower cost.

Objective - This randomized controlled trial (RCT) aimed to compare, on a population level, the efficacy of an identical, tailored smoking cessation intervention delivered by mobile text messaging versus email.

Methods - We conducted a nationwide 2-arm, double-blinded, fully automated RCT, close to a real-world setting, in Norway. We did not offer incentives to increase participation and adherence or to decrease loss to follow-up. We recruited users of the website, slutta.no, an open, free, multi-component Norwegian internet-based smoking cessation program, from May 2010 until October 2012. Enrolled smokers were considered as having completed a time point regardless of their response status if it was 1, 3, 6, or 12 months post cessation. We assessed 7315 participants using the following inclusion criteria: knowledge of the Norwegian language, age 16 years or older, ownership of a Norwegian cell phone, having an email account, current cigarette smoker, willingness to set a cessation date within 14 days (mandatory), and completion of a baseline questionnaire for tailoring algorithms. Altogether, 6137 participants were eligible for the study and 4378 participants (71.33%) provided informed consent to participate in the smoking cessation trial. We calculated the response rates for participants at the completed 1, 3, 6, and 12 months post cessation. For each arm, we conducted an intention-to-treat (ITT) analysis for each completed time point. The main outcome was 7-day self-reported point prevalence abstinence (PPA) at the completed 6 months post cessation. We calculated effect size of the 7-day self-reported PPA in the text message arm compared with the email arm as odds ratios (ORs) with 95% CIs for the 4 time points post cessation.