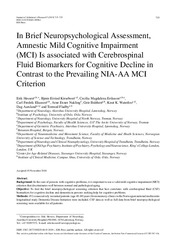 Background: In the care of persons with cognitive problems, it is important to use a valid mild cognitive impairment (MCI) criterion that discriminates well between normal and pathological aging.

Conclusions: The finding that amnestic MCI based on brief neuropsychological assessment is significantly associated with CSF biomarkers for cognitive decline and Alzheimer’s disease is in accordance with longitudinal studies that find memory impairment; both in itself and especially in combination with other cognitive deficit to constitute a risk factor for subsequent cognitive decline and dementia. The prevalence of pathological biomarkers for Alzheimer’s disease is common in the elderly and the clinical significance of present findings depend on longitudinal validation.