Academic detailing as a method of continuing medical education 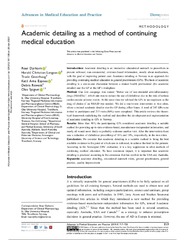 Method: Our first campaign was named “Better use of non-steroidal anti-inflammatory drugs (NSAIDs)”, which aim was to reduce the use of diclofenac due to the risk of serious cardiovascular adverse events. At the same time we advised the GPs to use naproxen as the drug of choice if an NSAID was needed. We did a one-to-one intervention in two cities, where a trained academic detailer met the GP during office hours. A total of 247 GPs were invited to participate and 213 visits (86%) were completed. This article reviews the theoretical framework underlying the method and describes the development and implementation of academic detailing to GPs in Norway.

Results: More than 90% the participating GPs considered academic detailing a suitable method for providing up-to-date evidence-based, manufacturer-independent information, and nearly all would most likely or probably welcome another visit. After the intervention there was a reduction of diclofenac prescribing of 16% and 18%, respectively, in the two cities.

Conclusion: We consider that academic detailing is a suitable method to bring the best available evidence to the point at which care is delivered, to achieve the best for the patients. According to the Norwegian GPs’ evaluation, it is a key supplement to other methods of continuing medical education. To have maximum impact, it is important that academic detailing is practiced according to the consensus that has evolved in the USA and Australia.