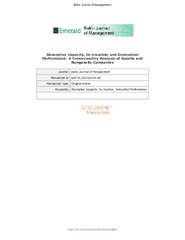 Purpose - The purpose of this paper is to examine the effect of absorptive capacity (ACAP) and co-creation on innovation performance (INN).

Design/methodology/approach - The authors use survey data from Swedish and Norwegian companies (n=1,102) and establish a cross-national equivalence between Sweden and Norway.

Findings - The subsequent structural model revealed interesting differences. For Sweden, co-creation fully mediates the effect of ACAP on INN, whereas for Norway, ACAP has a direct effect on INN with no mediation. Subsequent regressions including control variables showed that the structural model is reasonably robust. The authors conclude that, despite the many common national features conducive to innovation between these two countries, sufficient differences remain to create substantial variation in the innovation processes.

Originality/value - The study presents a second-order model of ACAP that permits a unique test of cross-country differences.