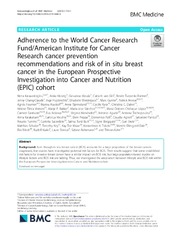 Background - Even though in situ breast cancer (BCIS) accounts for a large proportion of the breast cancers diagnosed, few studies have investigated potential risk factors for BCIS. Their results suggest that some established risk factors for invasive breast cancer have a similar impact on BCIS risk, but large population-based studies on lifestyle factors and BCIS risk are lacking. Thus, we investigated the association between lifestyle and BCIS risk within the European Prospective Investigation into Cancer and Nutrition cohort.

Methods - Lifestyle was operationalized by a score reflecting the adherence to the World Cancer Research Fund/American Institute for Cancer Research (WCRF/AICR) cancer prevention recommendations. The recommendations utilized in these analyses were the ones pertinent to healthy body weight, physical activity, consumption of plant-based foods, energy-dense foods, red and processed meat, and sugary drinks and alcohol, as well as the recommendation on breastfeeding. Cox proportional hazards regression was used to assess the association between lifestyle score and BCIS risk. The results were presented as hazard ratios (HR) and corresponding 95% confidence intervals (CI).

Results - After an overall median follow-up time of 14.9 years, 1277 BCIS cases were diagnosed. Greater adherence to the WCRF/AICR cancer prevention recommendations was not associated with BCIS risk (HR = 0.98, 95% CI 0.93–1.03; per one unit of increase; multivariable model). An inverse association between the lifestyle score and BCIS risk was observed in study centers, where participants were recruited mainly via mammographic screening and attended additional screening throughout follow-up (HR = 0.85, 95% CI 0.73–0.99), but not in the remaining ones (HR = 0.99, 95% CI 0.94–1.05).