Electrosurgery and temperature increase in tissue with a passive metal implant 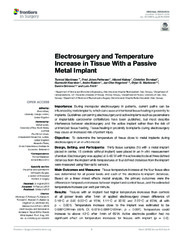 Objective: To determine the temperature of tissue close to metal implants during electrosurgery in an in-vitro model.

Design, Setting, and Participants: Thirty tissue samples (15 with a metal implant placed in center, 15 controls without implant) were placed in an in vitro measurement chamber. Electrosurgery was applied at 5–60 W with the active electrode at three defined distances from the implant while temperatures at four defined distances from the implant were measured using fiber-optic sensors.

Conclusions and Relevance: The temperature of tissue close to a metal implant increases with passing electrosurgery current. There is a significant risk of high tissue temperature when long activation times or high power levels are used.