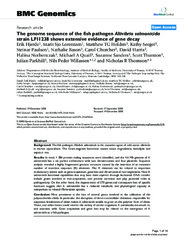 Results: In total, 4 286 protein coding sequences were identified, and the 4.6 Mb genome of A. salmonicida has a six partite architecture with two chromosomes and four plasmids. Sequence analysis revealed a highly fragmented genome structure caused by the insertion of an extensive number of insertion sequence (IS) elements. The IS elements can be related to important evolutionary events such as gene acquisition, gene loss and chromosomal rearrangements. New A. salmonicida functional capabilities that may have been aquired through horizontal DNA transfer include genes involved in iron-acquisition, and protein secretion and play potential roles in pathogenicity. On the other hand, the degeneration of 370 genes and consequent loss of specific functions suggest that A. salmonicida has a reduced metabolic and physiological capacity in comparison to related Vibrionaceae species.

Conclusion: Most prominent is the loss of several genes involved in the utilisation of the polysaccharide chitin. In particular, the disruption of three extracellular chitinases responsible for enzymatic breakdown of chitin makes A. salmonicida unable to grow on the polymer form of chitin. These, and other losses could restrict the variety of carrier organisms A. salmonicida can attach to, and associate with. Gene acquisition and gene loss may be related to the emergence of A. salmonicida as a fish pathogen.