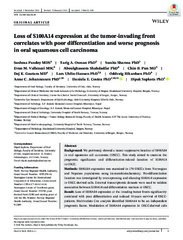 Conclusion - These results indicate that S100A14 is a pro‐differentiation protein and its expression might be useful as a prognostic marker in OSCC.