A prospective study on the effect of selfreported health and leisure time physical activity on mortality among an ageing population: results from the Tromsø study 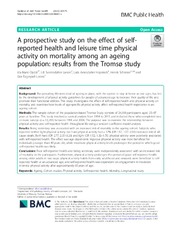 Methods - The sample cohort of the population-based Tromsø Study consists of 24,309 participants aged 25–97 years at baseline. This study involved a survival analysis from 1994 to 2015 and included those who completed two or more surveys (n = 12,241) between 1994 and 2008. The purpose was to examine the relationship between physical activity and self-reported health throughout life using a random coefficient model analysis.