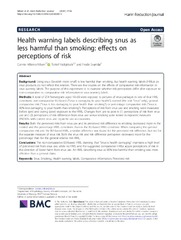 Conclusions - The non-comparative EU-based HWL claiming that “Snus is health damaging” maintains a high level of perceived risk from snus use, while no HWL and the suggested comparative HWLs adjust perceptions of risk in the direction of lower harm from snus use. An HWL describing snus as 90% less harmful than smoking was more effective than a general claim.