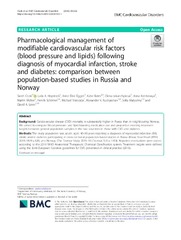 Background - Cardiovascular disease (CVD) mortality is substantially higher in Russia than in neighbouring Norway. We aimed to compare blood pressure- and lipid-lowering medication use and proportion meeting treatment targets between general population samples in the two countries in those with CVD and diabetes.

Conclusions - We identified different patterns of medication use in people with CVD and diabetes. However despite higher use of lipid-lowering medication in the Norwegian study treatment to target for total cholesterol was poor in both Russian and Norwegian studies. In contrast we found higher levels of use of antihypertensive medications in the Russian study but also that less participants met treatment targets for blood pressure. Further work should investigate what factors are responsible for this seeming paradox and how management of modifiable risk factors for secondary prevention could be improved.