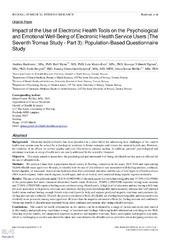 Background: Electronic health (eHealth) has been described as a silver bullet for addressing how challenges of the current health care system may be solved by technological solutions in future strategies and visions for modern health care. However, the evidence of its effects on service quality and cost effectiveness remains unclear. In addition, patients’ psychological and emotional reactions to using eHealth tools are rarely addressed by the scientific literature.

Objective: This study aimed to assess how the psychological and emotional well-being of eHealth service users is affected by the use of eHealth tools.

Methods: We analyzed data from a population-based survey in Norway, conducted in the years 2015-2016 and representing 10,604 eHealth users aged over 40 years, to identify how the use of eHealth tools was associated with feeling anxious, confused, knowledgeable, or reassured. Associations between these four emotional outcomes and the use of four types of eHealth services (Web search engines, video search engines, health apps, and social media) were analyzed using logistic regression models.

Results: The use of eHealth tools made 72.41% (6740/9308) of the participants feel more knowledgeable and 47.49% (4421/9308) of the participants feel more reassured about their health status. However, 25.69% (2392/9308) reported feeling more anxious and 27.88% (2595/9308) reported feeling more confused using eHealth tools. A high level of education and not having a full-time job were associated with positive reactions and emotions (feeling more knowledgeable and reassured), whereas low self-reported health status and not having enough friends who could provide help and support predicted negative reactions and emotions (ie, feeling anxious and confused). Overall, the positive emotional effects of eHealth use (feeling knowledgeable and reassured) were relatively more prevalent among users aged over 40 years than the negative emotional effects (ie, feeling anxious and confused). About one-fourth of eHealth users reported being more confused and anxious after using eHealth services.