Epidemiological and molecular characterization of Streptococcus pneumoniae carriage strains in pre-school children in Arkhangelsk, northern European Russia, prior to the introduction of conjugate pneumococcal vaccines 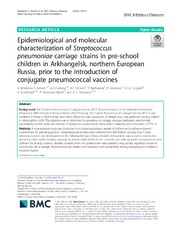 Background - The 13-valent Pneumococcal Conjugate Vaccine (PCV-13) was introduced in the National Immunization Programme (NIP) schedule in Russia in March 2014. Previously, the 7-valent Pneumococcal Conjugate Vaccine (PCV-7) was marketed in Russia in 2009 but has never been offered for mass vaccination. A carriage study was performed among children in Arkhangelsk in 2006. The objective was to determine the prevalence of carriage, serotype distribution, antimicrobial susceptibility and the molecular structure of Streptococcus pneumoniae strains before marketing and introduction of PCV-13.

Methods - A cross-sectional study was conducted on a cluster-randomized sample of children and a self-administrated questionnaire for parents/guardians. Nasopharyngeal samples were collected from 438 children younger than 7 years attending nurseries and kindergartens in the Arkhangelsk region, Russia. Detailed demographic data, as well as information about the child’s health, traveling, exposure to antimicrobials within the last 3 months and anthropometric measurements were collected for all study subjects. Variables extracted from the questionnaire were analysed using statistic regression models to estimate the risk of carriage. All pneumococcal isolates were examined with susceptibility testing, serotyping and multilocus sequence typing.

Results - The overall prevalence of asymptomatic carriage was high and peaking at 36 months with a rate of 57%. PCV-13 covered 67.3% of the detected strains. High rates of non-susceptibility to penicillin, macrolides and multidrug resistance were associated with specific vaccine serotypes, pandemic clones, and local sequence types. Nine percent of isolates represented three globally disseminated disease-associated pandemic clones; penicillin- and macrolide-resistant clones NorwayNT-42 and Poland6B-20, as well as penicillin- and macrolide-susceptible clone Netherlands3-31. A high level of antimicrobial consumption was noted by the study. According to the parent’s reports, 89.5% of the children used at least one antimicrobial regime since birth. None of the hypothesised predictors of S. pneumoniae carriage were statistically significant in univariable and multivariable logistic models.

Conclusions - The study identified a high coverage of the PCV-13-vaccine, but serotype replacement and expansion of globally disseminated disease-associated clones with non-vaccine serotypes may be expected. Further surveillance of antimicrobial resistance and serotype distribution is therefore required.