Molecularly matched therapy in the context of sensitivity, resistance, and safety; patient outcomes in end-stage cancer - the MetAction study 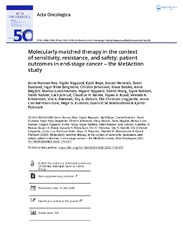 Material and methods: Metastatic tissue from 26 patients (16 colorectal cancer cases) was sequenced by the Oncomine assay. The study tumor boards interpreted called variants with respect to sensitivity or resistance to matched therapy and recommended single-agent or combination treatment if considered tolerable. The primary endpoint was the rate of progression-free survival 1.3-fold longer than for the most recent systemic therapy. The objective response rate and overall survival were secondary endpoints.

Results: Both common and rare actionable alterations were identified. Thirteen patients were found eligible for therapy following review of tumor sensitivity and resistance variants and patient tolerability. The interventions were inhibitors of ALK/ROS1-, BRAF-, EGFR-, FGFR-, mTOR-, PARP-, or PD-1-mediated signaling for 2–3 cases each. Among 10 patients who received treatment until radiologic evaluation, 6 (46% of the eligible cases) met the primary endpoint. Four colorectal cancer patients (15% of the total study cohort) had objective response. The only serious adverse event was a transient colitis, which appeared in 1 of the 2 patients given PD-1 inhibitor with complete response. Apart from those two, overall survival was similar for patients who did and did not receive study treatment.

Conclusions: The systematic MetAction approach may point forward to a refined framework for how to interpret the complexity of sensitivity versus resistance and patient safety that resides in tumor sequence data, for the possibly improved outcome of precision cancer medicine in future studies.