Objective Versus Subjective Effort in Schizophrenia 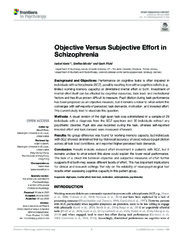 Background and Objectives: Performance on cognitive tasks is often impaired in individuals with schizophrenia (SCZ), possibly resulting from either cognitive deficits (e.g., limited working memory capacity) or diminished mental effort or both. Investment of mental effort itself can be affected by cognitive resources, task load, and motivational factors and has thus proven difficult to measure. Pupil dilation during task performance has been proposed as an objective measure, but it remains unclear to what extent this converges with self-reports of perceived task demands, motivation, and invested effort. The current study tried to elucidate this question.

Methods: A visual version of the digit span task was administered in a sample of 29 individuals with a diagnosis from the SCZ spectrum and 30 individuals without any psychiatric disorder. Pupil size was recorded during the task, whereas self-reported invested effort and task demand were measured afterward.

Conclusion: Results indicate reduced effort investment in patients with SCZ, but it remains unclear to what extent this alone could explain the lower recall performance. The lack of a direct link between objective and subjective measures of effort further suggests that both may assess different facets of effort. This has important implications for clinical and research settings that rely on the reliability of neuropsychological test results when assessing cognitive capacity in this patient group.