The case of case reports: A decade of publications by staff at a major university hospital 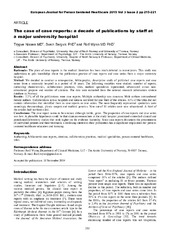 Rationale: The place of case reports in the medical literature has been much debated in recent years. This study was undertaken to gain knowledge about the publication practice of case reports and case series from a major university hospital.

Method: We decided to conduct a retrospective, bibliographic, descriptive study of published case reports and case series from a university hospital in a period of 10 years. The following variables were studied: number of reports, authorship characteristics, collaboration practices, titles, medical specialities represented, educational versus non-educational purpose and number of citations.The data were extracted from the national research information system database in Norway.

Results: 2.2%of all the publications were case reports. Multiple authorship was common. Male authors outnumbered female authors. Collaboration across hospitals and nations occurred for one third of the articles. 43% of the titles did not contain information that identified them as case reports or case series. The most frequently represented specialties were neurology, rheumatology, plastic surgery and medical genetics. Nine out of 10 articles were non- educational. A third of the articles had not been cited.

Conclusions: The case report seems to be a minor, although viable, genre. The proportion of case reports and case series was low. A plausible hypothesis could be that clinician-researchers at the study hospital prioritized controlled clinical and paraclinical/laboratory studies that rank higher on the evidence hierarchy. Since case reports document the presentations of individual patients and their treatment, a declining interest in their publication has a significant implication for person-centered healthcare education and training.