CORE-OM as a routine outcome measure for adolescents with emotional disorders: factor structure and psychometric properties 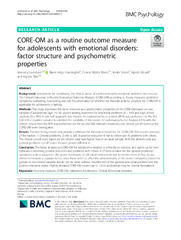 Background - Instruments for monitoring the clinical status of adolescents with emotional problems are needed. The Clinical Outcomes in Routine Evaluation-Outcome Measure (CORE-OM) according to theory measures problems/symptoms, well-being, functioning and risk. Documentation of whether the theoretical factor structure for CORE-OM is applicable for adolescents is lacking.

Methods - This study examined the factor structure and psychometric properties of the CORE-OM based on two samples of adolescents (age 14–18): youths seeking treatment for emotional problems (N = 140) and high school students (N = 531). A split half approach was chosen. An exploratory factor analysis (EFA) was performed on the first half of the stratified samples to establish the suitability of the model. A Confirmatory Factor Analysis (CFA) with the chosen model from the EFA was performed on the second half. Internal consistency and clinical cut-off scores of the CORE-OM were investigated.

Results - The best fitting model only partially confirmed the theoretical model for the CORE-OM. The model consisted of five factors: 1) General problems, 2) risk to self, 3) positive resources 4) risk to others and 5) problems with others. The clinical cut-off score based on the all-item total was higher than in an adult sample. Both the all-item total and general problems cut-off scores showed gender differences.

Conclusion - The factor analysis on CORE-OM for adolescents resulted in a five-factor solution, and opens up for new subscales concerning positive resources and problems with others. A 17-item solution for the general problems/symptoms scale is suggested. We advise developers of self-report instruments not to reverse items, if they do not intend to measure a separate factor, since these seem to affect the dimensionality of the scales. Comparing means for gender in non-clinical samples should not be done without modification of the general emotional problem and the positive resources scales. Slightly elevated CORE-OM scores (up to 1.3) in adolescents may be normal fluctuations.