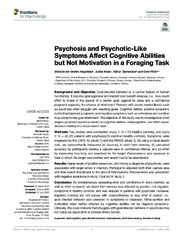 Background and Objective: Goal-directed behavior is a central feature of human functioning. It requires goal appraisal and implicit cost-benefit analyses, i.e., how much effort to invest in the pursuit of a certain goal, against its value and a confidence judgment regarding the chance of attainment. Persons with severe mental illness such as psychosis often struggle with reaching goals. Cognitive deficits, positive symptoms restricting balanced judgment, and negative symptoms such as anhedonia and avolition may compromise goal attainment. The objective of this study was to investigate to what degree symptom severity is related to cognitive abilities, metacognition, and effort-based decision-making in a visual search task.

Methods: Two studies were conducted: study 1: N = 52 (healthy controls), and study 2: N = 46 (23 patients with psychosis/23 matched healthy controls). Symptoms were measured by the CAPE-42 (study 1) and the PANSS (study 2). By using a visual search task, we concomitantly measured (a) accuracy in short-term memory, (b) perceived accuracy by participants making a capture area or confidence interval, and (c) effort by measuring how long one searched for the target. Perseverance was assessed in trials in which the target was omitted and search had to be abandoned.

Results: Higher levels of positive symptoms, and having a diagnosis of psychosis, were associated with larger errors in memory. Participants adjusted both their capture area and their search investment to the error of their memory. Perseverance was associated with negative symptoms in study 1 but not in study 2.

Conclusion: By simultaneously assessing error and confidence in one’s memory, as well as effort in search, we found that memory was affected by positive, not negative, symptoms in healthy controls, and was reduced in patients with psychosis. However, impaired memory did not concur with overconfidence or less effort in search, i.e., goal directed behavior was unrelated to symptoms or diagnosis. Metacognition and motivation were neither affected by cognitive abilities nor by negative symptoms. Clinically, this could indicate that struggles with goal directed behavior in psychosis may not solely be dependent on primary illness factors.