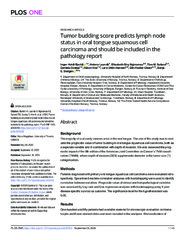 Background - The majority of oral cavity cancers arise in the oral tongue. The aim of this study was to evaluate the prognostic value of tumor budding in oral tongue squamous cell carcinoma, both as a separate variable and in combination with depth of invasion. We also assessed the prognostic impact of the 8th edition of the American Joint Committee on Cancer’s TNM classification (TNM8), where depth of invasion (DOI) supplements diameter in the tumor size (T) categorization.

Results - One-hundred and fifty patients had available material for microscopic evaluation on Hematoxylin and Eosin-stained slides and were included in the analyses. Reclassification of tumors according to TNM8 caused a shift towards a higher T status compared to the previous classification. The tumor budding score was associated with lymph node metastases where 23% of the patients with low-budding tumors had lymph node metastases, compared with 43% of those with high-budding tumors. T-status, lymph node status, tumor budding, depth of invasion, and the combined tumor budding/depth of invasion score were all significantly associated with survival in univariate analyses. In multivariate analyses only N-status was an independent prognosticator of survival.

Conclusion - Reclassification according to TNM8 shifted many tumors to a higher T-status, and also increased the prognostic value of the T-status. This supports the implementation of depth of invasion to the T-categorization in TNM8. Tumor budding correlated with lymph node metastases and survival. Therefore, information on tumor budding can aid clinicians in treatment planning and should be included in pathology reports of oral tongue squamous cell carcinomas.