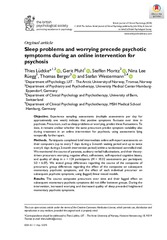 Objective - Experience sampling assessments (multiple assessments per day for approximately one week) indicate that positive symptoms fluctuate over time in psychosis. Precursors, such as sleep problems or worrying, predict these fluctuations. To date, it remains unclear whether the same precursors predict symptom variability also during treatment in an online intervention for psychosis, using assessments lying temporally further apart.

Methods - Participants completed brief intermediate online self‐report assessments on their computers (up to every 7 days during a 2‐month waiting period and up to twice every 6 days during a 2‐month intervention period) within a randomized controlled trial. We monitored the course of paranoia, auditory verbal hallucinations, and their theory‐driven precursors worrying, negative affect, self‐esteem, self‐reported cognitive biases, and quality of sleep in n = 124 participants (M = 10.32 assessments per participant; SD = 6.07). We tested group differences regarding the course of the composite of precursors, group differences regarding the effect of the composite on subsequent momentary psychotic symptoms, and the effect of each individual precursor on subsequent psychotic symptoms, using (lagged) linear mixed models.