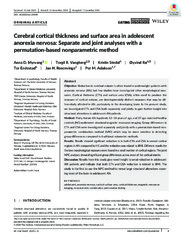 Objective - Reduction in cerebral volume is often found in underweight patients with anorexia nervosa (AN), but few studies have investigated other morphological measures. Cortical thickness (CTh) and surface area (CSA), often used to produce the measure of cortical volume, are developmentally distinct measures that may be differentially affected in AN, particularly in the developing brain. In the present study, we investigated CTh and CSA both separately and jointly to gain further insight into structural alterations in adolescent AN patients.

Discussion - Results from this study give novel insight to areal reduction in adolescent AN patients and indicate that both CTh and CSA reduction is related to BMI. The study is the first to use the NPC method to reveal large structural alterations covering most of the brain in adolescent AN.