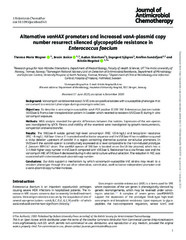 Background - Vancomycin variable enterococci (VVE) are van-positive isolates with a susceptible phenotype that can convert to a resistant phenotype during vancomycin selection.

Objectives - To describe a vancomycin-susceptible vanA-PCR positive ST203 VVE Enterococcus faecium isolate (VVESwe-S) from a liver transplantation patient in Sweden which reverted to resistant (VVESwe-R) during in vitro vancomycin exposure.

Methods - WGS analysis revealed the genetic differences between the isolates. Expression of the van-operon was investigated by qPCR. Fitness and stability of the revertant were investigated by growth measurements, competition and serial transfer.

Results - The VVESwe-R isolate gained high-level vancomycin (MIC >256 mg/L) and teicoplanin resistance (MIC = 8 mg/L). VVESwe-S has a 5′-truncated vanR activator sequence and the VVESwe-R has in addition acquired a 44 bp deletion upstream of vanHAX in a region containing alternative putative constitutive promoters. In VVESwe-R the vanHAX-operon is constitutively expressed at a level comparable to the non-induced prototype E. faecium BM4147 strain. The vanHAX operon of VVESwe is located on an Inc18-like plasmid, which has a 3–4-fold higher copy number in VVESwe-R compared with VVESwe-S. Resistance has a low fitness cost and the vancomycin MIC of VVESwe-R decreased during in vitro serial culture without selection. The reduction in MIC was associated with a decreased vanA-plasmid copy number.

Conclusions - Our data support a mechanism by which vancomycin-susceptible VVE strains may revert to a resistant phenotype through the use of an alternative, constitutive, vanR-activator-independent promoter and a vanA-plasmid copy number increase.