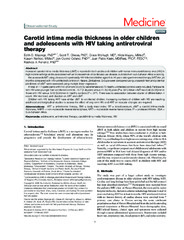 Increased carotid intima-media thickness (cIMT) is reported in both adults and children with human immunodeficiency virus (HIV) in high income settings and is associated with an increased risk of cardiovascular disease, but data from sub-Saharan Africa is lacking.

Children with HIV taking ART have similar cIMT to uninfected children. Increasing numbers of children with HIV are reaching adulthood and longitudinal studies to assess the effect of long-term HIV and ART on vascular changes are required.