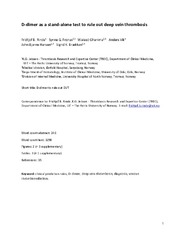 Background - Current guidelines recommend the use of clinical decision rules, such as Wells score, in combination with D-dimer to assess the need for objective imaging to rule out deep vein thrombosis (DVT). However, the clinical decision rule has limitations, and use of D-dimer as a stand-alone test has been suggested.

Objective - We aimed to assess the safety and efficiency of D-dimer as a stand-alone test to rule out DVT in outpatients referred with suspected DVT.

Methods - We collected data from consecutive outpatients referred to our hospital with suspected DVT in 2008–2018. D-dimer levels were analyzed using STA® Liatest® D-Di assay. D-dimer as a stand-alone test was theoretically applied in retrospect, and the number of misdiagnosed events were estimated as if such an approach had been initially used. All patients were followed for three months.

Conclusion - D-dimer as a stand-alone test may be safe for excluding proximal DVT and reduce the proportion of required ultrasounds. Prospective management studies are needed to confirm our findings.