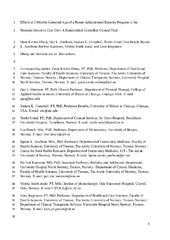 Background - Despite the risk of delayed motor development in infants born preterm, knowledge about interventions in the neonatal intensive care unitt (NICU) and the effects of dosing is sparse.

Objective - The objectives of this study were to examine the effectiveness of a parent-administered exercise program in the NICU on motor outcome at 3 months corrected age (CA) and the effect of dosing on motor performance.

Design - This was a randomized clinical trial. Setting The study was conducted at 3 university hospitals in Tromsø, Trondheim, and Oslo, Norway.

Participants - A total of 153 infants with gestational age <32 weeks at birth were randomly assigned to intervention or control groups.

Intervention - A 3-week parent-administered intervention designed to facilitate movements in preterm infants was performed in the NICU. Parents were asked to administer the intervention 10 minutes twice a day.

Limitations - The number of infants born before 28 weeks was small. A spillover effect in favor of the control group was possible. We do not know if the infants received physical therapy after discharge from the hospital.

Conclusions - There was no difference in motor performance between the intervention group and the control group at 3 months CA. However, an increased intervention dose was positively associated with improved motor outcome.