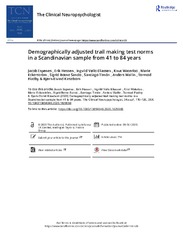 Objective - The trail making test (TMT) is one of the most widely used neuropsychological tests. TMT-A provides measures of visual scanning/visuomotor speed and TMT-B involves additional demands on executive functions. Derived scores TMT B-A and TMT B/A enhance measures of executive functioning. However, simple B-A subtraction may lead to false estimates of executive dysfunction in clinical samples. Norms for TMT have been published in several countries but are currently lacking for Scandinavia.

Methods - A total of 292 healthy controls between age 41 and 84 years were included from the Norwegian “Dementia Disease Initiation” (DDI) study (n = 170) and the Gothenburg Mild Cognitive Impairment (MCI) study (n = 122). We used a regression-based procedure to develop demographically adjusted norms for basic (TMT-A and TMT-B) and derived measures (TMT B-A and B/A). We also propose a regression-based alternative to the TMT B-A measure named “TMT-β”. The proposed norms were compared to norms from Heaton et al. and Tombaugh.

Results - Due to differences in the estimated normative effects of demographics on performance, the proposed norms for TMT were better suited in the Scandinavian sample compared with published non-Scandinavian norms. The proposed TMT-β measure was highly correlated to TMT B-A (r = 0.969, p < 0.001).

Conclusion - We here propose demographically adjusted norms for the TMT for ages 41 through 84 years based on a Scandinavian sample. We also present the regression-based derived measure TMT-β which may resolve issues with the conventional TMT B-A measure.