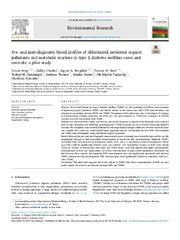 Objective - Several risk factors for type 2 diabetes mellitus (T2DM) are also associated with blood concentrations of persistent organic pollutants (POPs), and factors related to the disease may affect POP concentrations, and subsequent associations between POPs and T2DM. The purpose of this pilot study was to investigate the change in concentrations of lipids, hormones and POPs pre- and post-diagnosis in T2DM cases compared to healthy controls and their associations with T2DM.

Methods - We measured POPs, lipids, and thyroid and steroid hormones in plasma from 44 female cases collected prior to (pre-diagnostic) and following (post-diagnostic) T2DM diagnosis, and in 44 healthy female age-matched controls. We compared cross-sectional differences and longitudinal changes within and between matched cases and controls with t-tests and multivariable linear regression models. Associations between POP concentrations and T2DM were investigated using conditional logistic regression.

Conclusions - This pilot study suggests that factors related to T2DM affect blood concentrations of POPs and may partly explain the positive associations between POPs and T2DM.